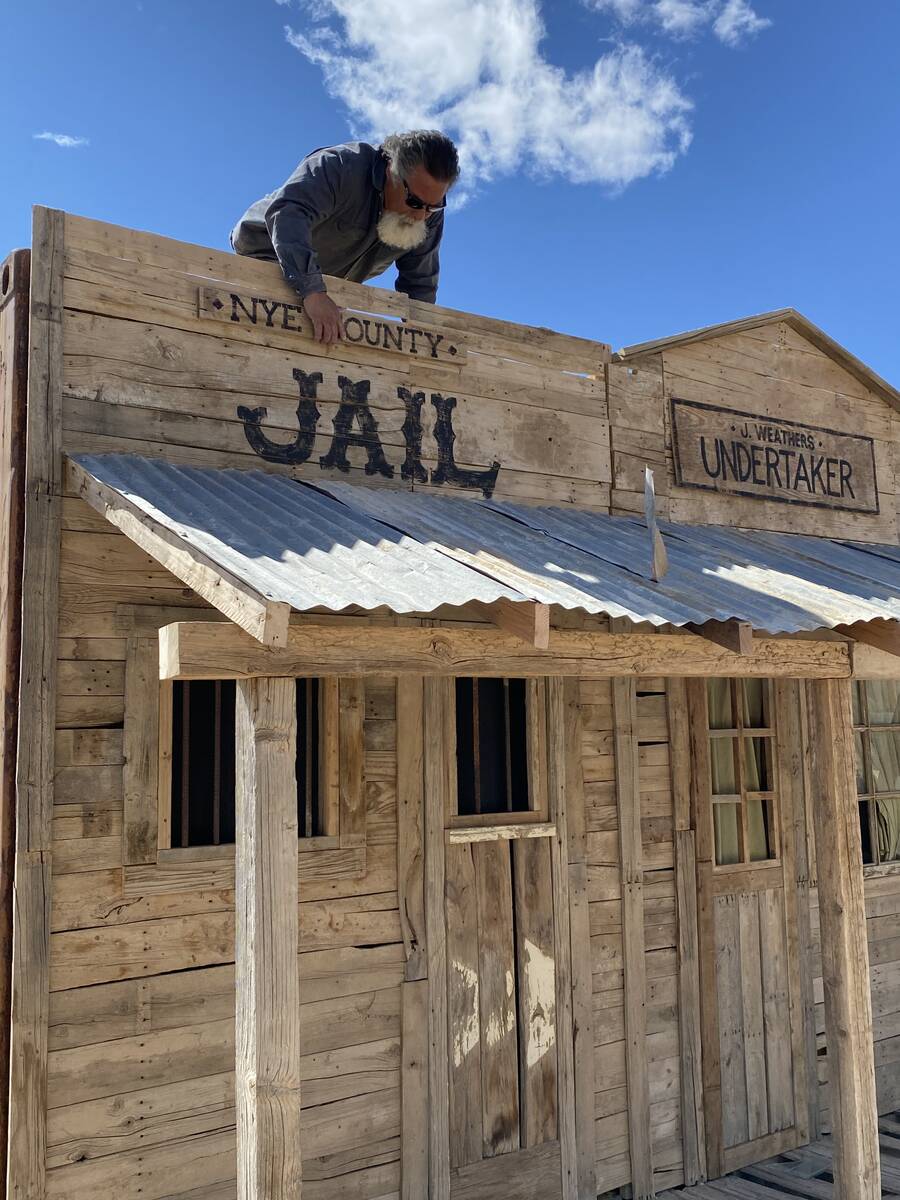 Patrick Billings/Special to the Pahrump Valley Times Pallets that were already on the property were taken apart and used to make walls for the facades to the western town he created.

Patrick Billings/Special to the Pahrump Valley Times Jerry Orozco, a retiree who recently moved to Pahrump found a project that appealed to his artistic nature and helped to beautify Pahrump. 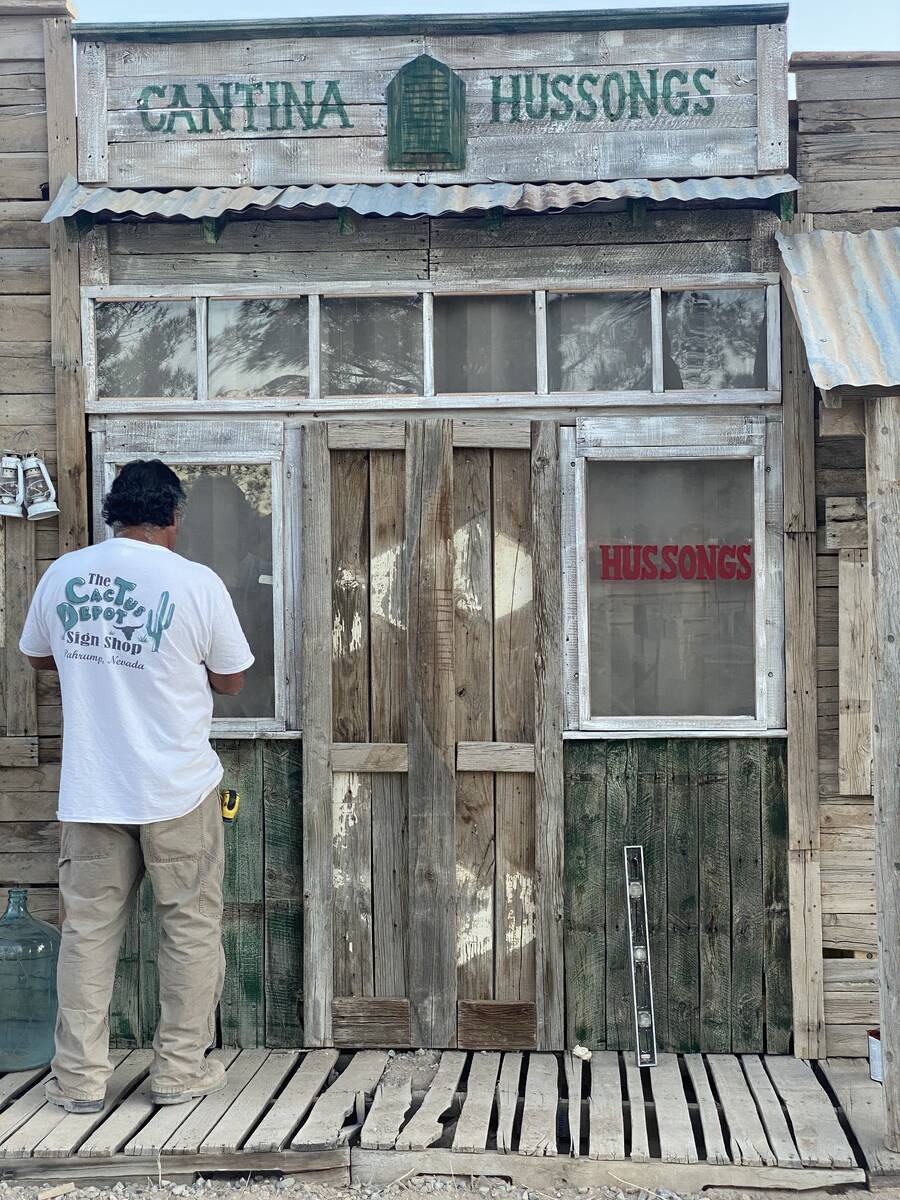 Patrick Billings/Special to the Pahrump Valley Times Orozco’s intention was to make the containers easier on the eye and blend better into its surroundings. 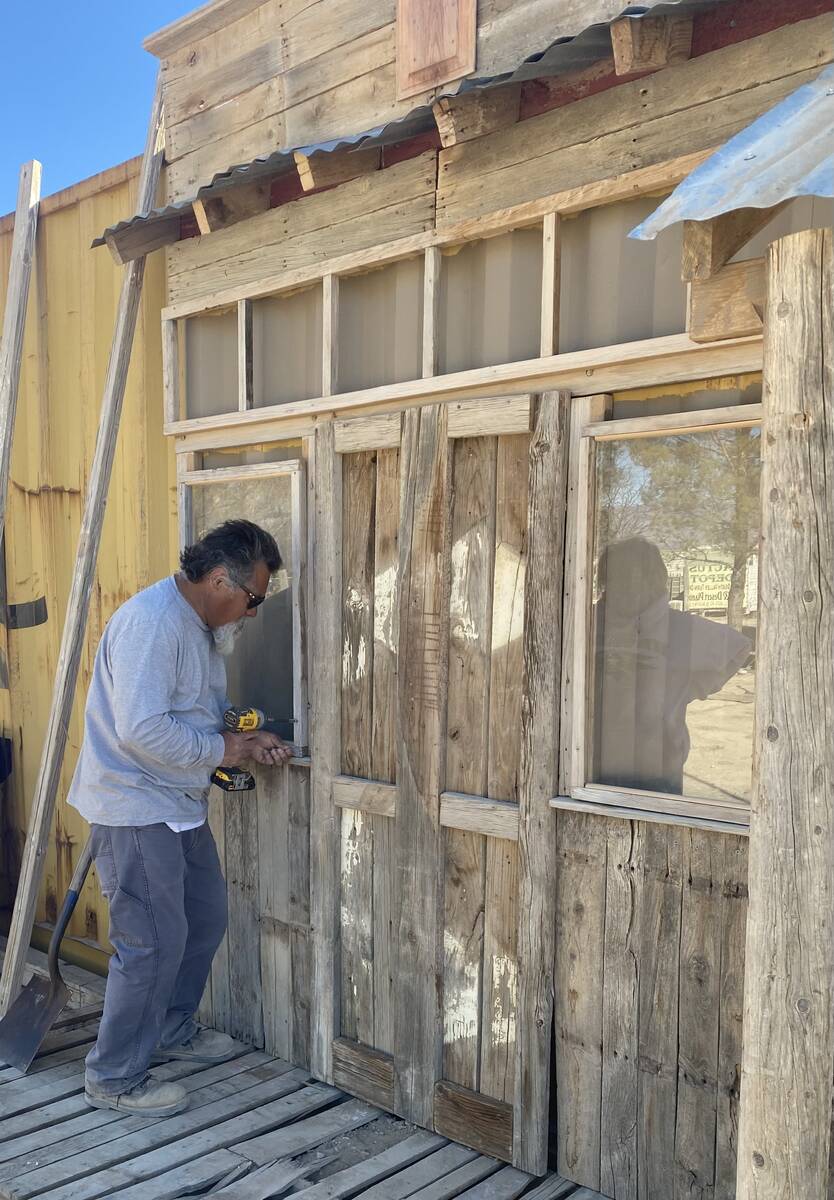 Patrick Billings/Special to the Pahrump Valley Times Orozco said most of the cost was in purchasing screws to put it all together, everything else was recycled from old pens and other materials and scraps found on the property

Jerry Orozco, 61, is the self-proclaimed mayor of Weathers Gulch Ghost Town, a place the artist conceived, designed and developed with ingenuity.

Born and raised in California, Orozco loved to draw from a young age, when he first got involved with graphics.

He worked over 35 years doing artwork for a screen printing company as well as making embroidery patterns and signage for several California businesses — including his own business for several years.

But it wasn’t until recently, when he retired to Pahrump, that Orozco had the ingenious idea to decorate the facades of storage containers.

The idea was hatched on his in-laws’ property in Pahrump. He purchased three 40-foot containers to store his things while they moved out here. One container was for storage, and he assembled the other two side-by-side and welded them together to create one big unit.

The containers now serve as his Cactus Depot Sign Shop.

“Before this whole thing with the containers could be done, I had to clean out the property which had goat and emu pens, chicken coops, and peacock nests,” Orozco said. “It also had remnants of the old Cactus Depot Nursery and Landscape business from many years ago, plus a whole bunch of old pallets.”

After the cleaning, he set the containers on the property, and noticed how horribly they stood out.

“I’ve been around Pahrump noticing that a lot of people out here have containers on their property, and I could see that they just all stuck out there — blue ones, yellow ones, red ones — but that was it, they just stuck out like a sore thumb,” Orozco said.

He started thinking about how he could make them easier on the eye.

“My idea was to decorate the containers to blend into the property,” he said.

It’s then that he embarked on a creative journey.

Orozco had the skills. And with power tools, wood, his welding kit and artistry supplies he pretty much had everything he needed to make the total conversion possible.

“I took some of the old pallets that were already here on the property and started taking them apart and using the planks from them to make walls for the facades to the Western town that I built, which we now call ‘Weathers Gulch’,” said Orozco.

He collected old windows to use, made doors out of some of the scrap from the old pens that were on the property. Even the old, corrugated tin from some of the roofs of the pens were used in the conversion of the containers.

According to Orozco, most of the cost was in purchasing screws to put it all together. Everything else was recycled.

Fast-forward to six months later and what you see is a collaboration of different ideas from his wife, the in-laws, and friends who added to the scenery.

“Once it cools down a bit out here, we are planning a family BBQ out in front of the town to kind of celebrate the completion of the ‘ghost town’ and our becoming Pahrumpians and of course the start of a new chapter in our lives,” Orozco said.

Patrick Billings is a freelance writer in Pahrump. Contact him at aregularbillings@gmail.com.

Written by Teresa Kenney Parker on August 22, 2022. Posted in Uncategorized